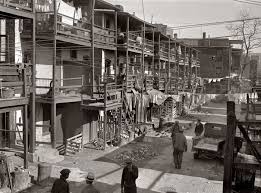 1.1. BACKGROUND OF THE STUDY

Human beings are naturally gregarious and no human being is an island on his own. There is therefore a need for them to interact, cohabit, and do things in common. The Port harcourt metropolis has witnessed continuous growth in demand for housing units by low-income earners for all types of properties, especially during the era of economic boom in the 1980s (Oni, 2008). The low-income earners have peculiar taste for tenement properties because of its low rent, though many of such properties lack basic amenities. The tenement type of residential properties usually consists of unit rooms flanking both sides of a central passage that connects the rooms to shared unit kitchens and toilets at the rear. Sometimes the kitchen is attached to the structure while the common toilets and bathrooms are in most cases detached from the main building. This structure of building was said to have originated from Brazil at the end of slave trade era. The property is also characterized by overcrowding and vices; with several individual families occupying unit rooms or room-and-parlours; and individual occupiers having differing tastes, aspirations and socio-cultural backgrounds. As a result of differing socio-cultural backgrounds, on many occasions the occupiers of the low-income houses engage in regualr arguments and in most cases may result to fighting and violence, and because of the population of occupiers, the facilities are inadequate with the use of available bathrooms, kitchens and toilets carried out on rotational basis. The occupiers often resort to cooking at the central passage. Disagreement, misunderstanding, quarrelling and open confrontations occasionally bloody do occur.

Conflicts are a natural part of human interaction and it is common amongst occupiers of land and buildings have been the concern of many individuals and body corporate. They occur amongst the occupiers of tenement houses in the port harcourt metropolis, and the need to examine the issue of conflicts amongst the low income housing residents with the aim of finding solution has made the study vey significant. Towards this end, three questions are posed: What are the most common conflicts amongst the occupiers of low-income residential properties? How are such conflicts resolved whenever they arise? What are the strategies for peaceful resolution of disputes amongst the study group? What are the best ways to resolve such conflicts? The choice of the study area is based on many factors. Lagos State is a socially heterogeneous city with tribes and nationals from within and outside Nigeria aggregating in port harcourt metropolis. The city represents the melting-pot of various races, and of economic activities with high net-worth manufacturing, commercial entities, high grade residential precincts, highly productive industrial concerns that have congregated to take advantage of the nearness to sea and international airports, and rail systems, and also served with networks of trunk roads. This makes demand for residential properties increase on daily basis as migration of all classes of people into the State increases. In addition, Lagos has been selected because it is the economic, social, commercial, industrial and political nerve-centre of Nigeria and, by extension, the nervecentre of West Africa sub-region. The degree of urbanization exemplified by the study area justifies that deduction and recommendations made in respect of thereof will be applicable to other states in Nigeria, and Africa countries (Oni, 2008).

1.2. STATEMENT OF THE GENERAL PROBLEM

The menace of poor housing in Nigeria as a result of population explosion which has resulted to the erection of tenement buildings to has been a major problem and has regrettably led to various social vices and more regrettably has led to domestic conflict. Tenement housing in most part of the country has been both a crime and violence breeding ground in Nigeria leading to the increase in violence which has contributed to the already alarming rate of insecurity in Nigeria.

1.3. AIMS AND OBJECTIVES OF THE STUDY

H0: tenement housing does not impact on domestic conflict in Nigeria

H0: there is no significant relationship between tenement housing and domestic conflict in Nigeria

H0: there is a significant relationship between tenement housing and domestic conflict in Nigeria

1.6. SIGNIFICANCE OF THE STUDY

1.7. SCOPE AND LIMITATION OF THE STUDY

The study is restricted to tenement housing and induced domestic conflict in Nigeria with diobu Port Harcourt serving as a case study.

LIMITATION OF THE STUDY

Financial constraint: Insufficient fund tends to impede the efficiency of the researcher in sourcing for the relevant materials, literature or information and in the process of data collection (internet, questionnaire and interview)

Time constraint: The researcher will simultaneously engage in this study with other academic work. This consequently will cut down on the time devoted for the research work.

Can be said to be  a run-down and often overcrowdedapartment house, especially in a poor section of a large city. It is a substandard multi-family dwelling in the urban core, usually old and occupied by the poor.

CRIME: This is an act harmful not only to some individual or individuals but also to a community, society or the state (“a public wrong”). Such acts are forbidden and punishable by law.  Can also be said to be an offence that merits community condemnation and punishment, usually by way of fine or imprisonment.

DOMESTIC CONFLICT: this is a pattern of behavior which involves violence or other abuse by one person against another in a domestic setting, such as in marriage or cohabitation.