THE IMPACT OF INFLATION ON GOVERNMENT SPENDING IN NIGERIA ECONOMY

THE IMPACT OF INFLATION ON GOVERNMENT SPENDING IN NIGERIA ECONOMY 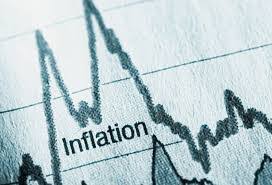 Inflation is an inevitable property of any economy in the world. It influences every country, negatively as well as positively, whether it is developed or developing country as well. Anyanwu (2011) stated that inflation is an important factor leading to social and economic instability and disorder. It is one of the most largely observed and tested economic variables both theoretically and empirically. Its causes, impacts on other economic variables, and cost to the overall economy are well known and understood.Nigeria, being a developing country, could not overcome the continuously year to year climbing up inflation, and also its causes and consequences.

After remaining relatively low for quite a long time, the inflation rate in Nigeria started to accelerate in late 2003. The role of money supply appears significant in influencing food price inflation in Nigeria (Anyanwu, 2011).which disturbed family budget as well as consumer’s purchasing power. People struggled in order to maintain their living standard but it slumped down gradually. Many authors have written on the impacts of inflation and cost of living on the Nigerian economy, but the authors have different views, nevertheless, one common thing is that all the authors agree that inflation and cost of living have various impacts on the economy of Nigeria.The problem created by the rising prices of goods and services leading to higer cost of living has become too difficult for the government to solve. During inflationary period, fixed amounts of money buy less quantity of goods and services. The real value of money is drastically reduced i.e the purchasing power of consumers are reduced.

Government spending also referred to as government expenditure relationship between inflation has continued series of debate among scholars. Keynes (1936) argues that the solution to economic depression is to induce the firms to invest through some combination of reduction in interest rates and government capital investment including infrastructure.This claim that increasing government expenditure promotes economic development is not supported by all scholars. A number of prominent authors especially of the neoclassical school argue that increased government expenditure may slow down the aggregate performance of the economy because in an attempt to finance raising expenditure, government may have to increase taxes and or borrowing. The higher income tax may discourage or may be a disincentive to additional work which in turn may reduce income and aggregate demand. In the same manner, high corporate tax leads to increase in production costs and reduce profitability of firms and their capital to incur investment expenditure.  On the other hand, increased government borrowing (from the banks) required to finance its expenditure may compete and crowds-out private sector and this reduce private investment in the economy. Sachs (2006) argues that among the developed countries, those with high rates of taxation and high social welfare spending perform better on most measures of economic performance compared with countries with low tax low rates of taxation and low social services spending.

According to the Revenue Mobilization Allocation and Fiscal Commission – RMFC (2011) the federal government of Nigeria spends 52.2% of total government revenues. The remaining revenues are shared among the Federating States and Local Government Areas (LGAs) on the basis of detailed sharing formula.

READ ALSO: THE IMPACT OF INFLATION ON BAD DEBTS OF FINANCIAL INSTITUTION

1.2   STATEMENT OF THE PROBLEM

As far as Nigeria concerns regarding inflationary effects it has been experienced worst consequences reflected by poverty, food crises, price hike etc. Mahmood, Hafeez and Rasheed(2009) concluded that inflation causes poverty. Day to day increase in prices of commodities especially of non-food items like oil and gas snatch money from savings of consumers and uncertainty of prices, both food and non-food items, generate enthusiasm among people toward earn more and more therefore, people prefer to work over recreation underestimating their  Health.

Muoghalu, et.al. (2010) found that the inflation brings negative impact while exports and investment brings positive impact on Nigeria economy and suggested that we should encourage a larger scale of export promotion activities to enhance the economic growth. It will create numerous job opportunities which increase the per-capita earnings and standard of living.

The relationship between government expenditure and economic development has continued to generate series of debate among scholars. Government performs two functions – protection (and security) and provision of certain public goods (Nurudeen and Usman, 2008). Protection function consists of the creation of rule of law and enforcement of property rights. This helps to minimize risks to criminality, protect life and property and the nation from external aggression, defense, roads, education, health, power and communication to mention but a few.

However, some scholars did not support the claim that increasing government expenditure promotes economic development, instead they assert that high government expenditure may slow down overall aggregate performance of the economy in that in the bid to finance rising expenditure, government may have to increase taxes and/or borrowing. The higher income tax may discourage or be a disincentive to individual working for long hours or searching for additional work which in turn may reduce income and aggregate demand. In the same way, higher corporate tax (profit tax) tends to increase production costs and reduces the profitability of firms and their capacity to incur investment expenditure. Moreover, if government increases borrowing (especially from the banks) in order to finance its expenditure, it will compete (crowds-out) away the private sector, thus reducing private investment. It was further argued that in a bid to score cheap popularity and ensure that they continue to remain in power; politicians and government officials sometimes increase expenditure and investment in unproductive projects or in goods that the private sector can produce more efficiently. Thus, government activity sometimes produces misallocation of resources and impedes the development of national output.

In Nigeria, the government expenditure has continued to rise due to receipts from oil revenue (Petroleum profit tax and royalties) and non-oil revenue (company income tax, custom and excise duties, value added tax [VAT] and others) (CBN Statistical Bulletin, 2012). And increased demand for public (utilities) goods like roads, communication, power, education and health. Besides there is increasing need to provide both internal and external security for the people and the nation.

Unfortunately, rising government expenditure has not translated to meaningful development and development, as Nigeria ranks among the poorest countries of the world. In addition, many Nigerians have continued to wallow in abject poverty, while more than 60.9% of over 163 million population poor. The Business Day Newspaper of Tuesday 14 February, 2012 reported that the percentage of Nigerians living in abject poverty – those who can afford only the bare essentials of food, shelter and clothing – rose to 60.9% in 2010 as compared to 54.7% in 2004. Although the Nigerian economy is projected to be growing, poverty is likely to get worse as the gap between the rich and the poor continues to widen. Couple with this, is dilapidated infrastructure (especially roads and power supply) that has led to the collapse of many industries, including high level of unemployment. Moreover, macroeconomic indicators like balance of payments, imports obligations, inflation rates, exchange rate, and national savings reveal that Nigeria has not fared well in the last couple of decades under review.

The main objective of this study is to empirically examine the impact of inflation on government expenditure in Nigeria.  The specific objectives of the study are as follows:

The research questions, which would guide this study, are as follows: